The walk was scheduled for 2 hours and we started at 12 pm by first making our way to Portobella Road.

Portobella Road was previously called Green Lanes up until 1740 and also known as Portobello Lane and was nothing more than a rough country track. The name Portobello comes from Puerto Bello, a harbour town situated near the northern end of the present-day Panama Canal. The port was captured by the English navy from the Spaniards in 1739 led by Admiral Vernon. Portobella means rich wealthy in Spanish.

Admiral Vernon introduced rum from the Caribbean to his sailors and due to their drunkenness he watered it down.

Immigrants from the Caribbean countries had been invited to Britain by Enoch Powell to help rebuild Britain post war. Due to housing racism they were forced to live in bombed out dilapidated buildings and slum areas. 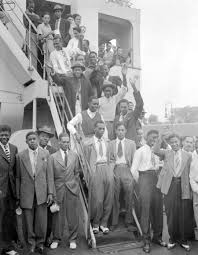 Mrs Fisher of Tavistock Road lodging-house became known as the first Notting Hill landlady to rent to black people charging a higher rent for tenants friends to stay. This increased the population of immigrants to such places as Powis Square and also led to housing exploitation and further racism. By the late 50s 7,000 black people had settled in Notting Hill, mostly in the Colville area which was known as ‘Brown Town’. There was also an increase in black sub-landlords. 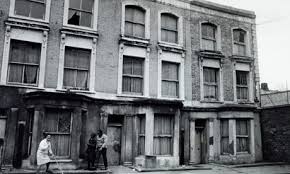 Ex RAf veteran Baron Baker who lived at 9 Blenheim Crescent visited a public bar called Apollo on All Saints Road as that was the only place that would serve him. This also led to Caribbeans developing their own scene consisting of drinking clubs, basement clubs for daytime gambling, rent parties and dances with music from jazz and calypso to reggae.

We went to 11 All Saints Road and met the founder of Peoples Sound independent record shop Daddy VGO. He has been promoting reggae music from Jamaica for over 20yrs serving the community with rare vinyl records, posters, videos and cd. He set up Original Peoples sound system which plays outside the shop during the carnival.

1958 Race riots: The white defence league and Oswald Moses a known fascist lived at 47 Kensington Park Road in Notting Hill.. Race Tensions rose between the Caribbean and native British citizens. In 1958 gangs of men were known to hang out in the streets of Notting Hill shouting racist remarks Under the leadership of Baron Baker the black community retaliated and threw petrol bombs back.. Word spread to other populated black areas in London and tention gained between blacks and whites. This led to the Notting Hill riots.

Trinidadian Claudia Jones was a civil rights activist, refugee and journalist who set up the first ever weekly West Indian paper. She also campaigned against racist immigration and for decent housing for immigrants.

In response to the 1958 race riots she introduced the African Caribbean Carnival to the UK as an avenue to bring the community back to celebrate their own culture and traditions and as a safe place. This took place in St Pancras town hall, now the Camden Centre, in 1959, and moved to Notting Hill in 1964. Carnival originated in Trinidad where steel bands would play by freed enslaved people who were emancipated as a way to celebrate freedom.

On 22nd August to mark the 50th Anniversary of Carnival a blue plaque was erected on Tavistock Road in honour of Claudia Jones.

The Tabanacle in Powis Square was built in 1887 and served as a church. In the 1970s the grade 2 listed building became a community arts centre and the hub of the Notting Hill Carnival and the Mangrove steel band. 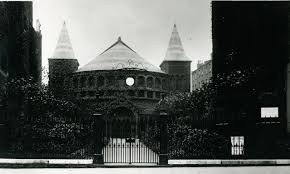 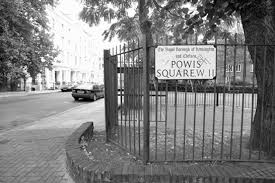 After 2 hours of walking around the  Notting Hill area we decided to have a bite to eat – but it was not fufu!

Greetings and welcome to my blog page

'BACK TO OUR ROOTS.

I am a proud Ghanaian who was blessed with the name Naa Dzamah Pobee, but my friends call me Sister E.

This is a platform dedicated to grass-roots origins inspired by Culture and Traditions, Holistic Well-being, Mother Earth, Soul & Spirituality. We have gained knowledge and wisdom, but if it is not shared, then where is the love -

So 'BACK TO OUR ROOTS' was born.

Celebration of rich culture and tradition at Hoggbetsotso with chiefs and people of Anlo, Vilra Region in Ghana.
… See MoreSee Less
View on Facebook
·
Share

Join us in Ghana for a Cultural Retreat. Send Expression of Interest to info@thecalabashhub.com for more info.
… See MoreSee Less

Akyaaba Addai-Sebo is a Ghanaian analyst, journalist and pan-African activist who is credited with developing in 1987 the recognition of October as Black History Month in the UK.
… See MoreSee Less

I am in the knowledge that death can never extinguish the torch "which I have lit in Ghana and Africa. Long after i am dead and gone, the light will continue to burn and be borne aloft, giving light and guidance to all people"Kwame Nkrumah.21 September marks the anniversary of the birth of Dr Kwame Nkrumah. The first President of Ghana, and Pan African icon instrumental in leading Ghana to independence. Today in Ghana is a public holiday to pay homage.
… See MoreSee Less

The 𝘽𝙖𝙤𝙗𝙖𝙗 tree is known as the

Believe in the process. Sometimes we have to take

𝙂𝙖𝙣𝙫𝙞𝙚 is a village on stilts in